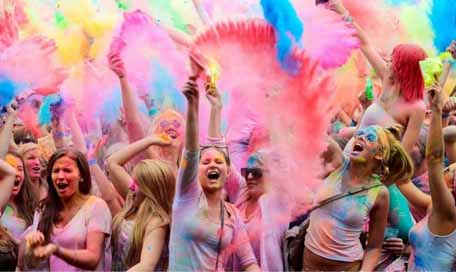 One of the major festivals of India, Holi is widely celebrated throughout the country with zeal and enthusiasm. The festival brings a unique charm in the atmosphere. Holi is the festival of colors which is filled with fun and unique excitement that can be seen in the crowd.
The festival is celebrated in the month of spring, a season of joy and hope in March and this year Holi is on 20th March and 21st March. It is for two-day celebration the first day is known as “Choti Holi” or “Holika Dahan” and the second day is of Holi celebration. The vibrancy of colors can be seen in the air that brings rejoice and positivity in the lives. Each and every estate of India celebrates Holi in a different way and follows unique rituals. Here are some types of Holi which are celebrated with zeal and enthusiasm in a particular region that you must experience in the Holi India Tour.

Shantiniketan Holi in Bengal
The Holi festival in Bengal is known as Shantiniketan Holi. The festival starts with the famous Bengali poet of Rabindranath Tagore, the legend introduce the Basant Utsav to revive the ancient tradition. Till now this tradition is widely followed in the entire state. Students dress up in the colorful attire and put on extravagance for the visitors. Celebrate Holi in Bengal and enjoy the cultural tradition of the region which brings happiness and joy in the crowd.

Musical Holi of Delhi
The capital city of India, Delhi widely celebrates the festival with enthusiasm and zeal. People enjoy the music and dance while playing Holi. Lots of lip-smacking delights are made on the occasion of Holi in Delhi and other major parts of India. One can savor the unique Holi dishes like gujiya, bhang lassi, saffron rice, etc. Holy cow is the most happening attraction of festivals of Delhi. It is the festival where every music lover flocks in the festival of spring.

Holi with Royals in Jaipur
Celebrate Holi with royals in Jaipur and enjoy the tradition of Holi festival in the capital city of Rajasthan. The holi events feature with Rajasthani folk dance and music performance. In Jaipur, you will be able to found elephants parades, tug of war competition between elephants, beauty contest of elephants. Holi brings extra fun and excitement among the crowd which includes locals as well as international visitors.

Kapda fad Holi in Pushkar
On the eve of Choti Holi, a bonfire is conducted by the locals to which is known as Holika Dahan. The Holi festival in Pushkar makes the aura full of joy and love. People gather from different places to get the glimpses of Holi celebration in Pushkar. Pushkar is a small city of Rajasthan which is well-known for its divinity and Pushkar fair. In this, men’s play crazy pranks with the other people and enjoy the festival with zeal and enthusiasm.
These are some of the most popular Holi celebrations of India which are one of the must-experienced festivals of the country. You can plan your Holi Tour in India and enjoy the festival with locals. You can also savor the delicious taste of Holi cuisines which are specially made on this occasion. Get blend with the locals in Holi Tour Package and experience the vibrant cultures and traditions of this festival in different parts of the country.