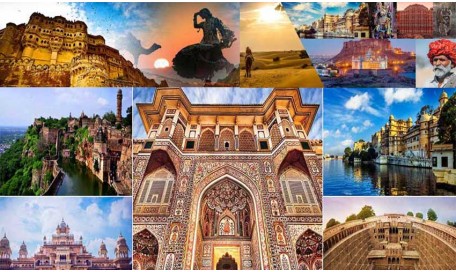 Guide To Rajasthan Tour -Cover All The Best Tourist Places

Popularly known as Land of the Kings, Rajasthan is one of the most colorful and culturally rich states of India. It’s a place which is included in most people's trip list. From places to forts, from deserts to lakes, delicious local delicacies you can get it all in Rajasthan. Lets see some of he famous places which you can visit on your Rajasthan Incredible Tours

Jaipur - Also known as the Pink City due to the colors of the buildings here, Jaipur the capital city of Rajasthan is also the largest city in Rajasthan. Being one of the travel places of the Golden triangle circuit, Jaipur is one of the most visited places in Rajasthan. Home to the UNESCO heritage sites like Amber Fort and Jantar Mantar, there are many other places like Hawa Mahal, City Palace, Birla Observatory, Birla Mandir, Nahargarh Fort, Jaigarh Fort and others which you can visit. You can also enjoy the local delicacies like Ghevar, Dal bati churma and others as well.

Udaipur - Also known as the City of Lakes or Venice of the East, the city of Udaipur is a place of alluring lakes, beautiful palaces and vibrant culture. It is one of the most romantic cities in India. It is one of the must visit places in Rajasthan. On your trip you can visit places like Lake Pichola where you can do boating, City Palace, Sajjangarh Palace, Bagore ki Haveli, Jagmandir Palace, Saheliyon Ki Bari, Jagdesh Temple, Fateh Sagar Lake, Monsoon Palace, Vintage Car Museum and others.

Jaisalmer - Also known as the Golden City, the city of Jaisalmer is situated in the heart of Thar Desert is a place of sun soaked sand dunes, beautiful forts, rich culture and traditions. It is said that the aerial view of the city looks like an image of a prince sitting on a sand ridge which is crowned by the Jaisalmer Fort. On your trip you can visit places like Jaisalmer Fort, San Sand Dunes, Tanot Mata Temple, Gadisagar Lake, Patwon Ki Haveli, Jain Temples, Jaisalmer War museum and other places.

Jodhpur - Also known as the blue city due to the blue colored walls and houses, the city of Jodhpur is the second largest city in Rajasthan. Jodhpur is mostly famous for its temples, lakes and local delicacies and also the Mehrangarh Fort which is the center of attraction of the city. You can visit the Fort for clicking beautiful pictures and also shop from the vendors on your way. There are other places like Umaid Bhawan Palace, Toorji Ka Jhalra, Mandore Garden, Jaswant Thada, sheesh Mahal, Sardar Market and many other places.

Mount Abu - Located in the Aravalli ranges, Mount Abu is the only hill station in Rajasthan. It’s a perfect place in Rajasthan where you can go to escape the city heat. On your trip to Mount Abu there are many places which you can visit like the famous Dilwara Temple, Nakki Lake, Guru Sikhar, Mount Abu Wildlife Sanctuary, Toad Rock which is also called mascot of Mount Abu, Raghunath Temple and many other places.

So plan your holidays and book your Rajasthan Tour package to explore the princely state of Rajasthan.