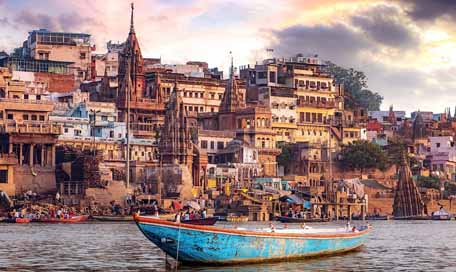 10 Incredible facts about India that every international traveler must know

Are you aware of the fact that India was once an island which later collided with the Asian continent? Did you know that the Indian Empire was the richest one in history? Yes, there are many such things about India which you might not know or unheard. Here are 10 incredible facts about India that every International traveler must know –
01: India was an Island –
As mentioned above India was once an Island; to this note around 10 million years ago the land was a part of a supercontinent known as Gondwanaland. The island was 50 million years ago have a collision with Asia. Fossilized sea shells found in the mountains are evidence to it.
02: The second largest English speaking country –
More than 125 million English speakers are there in India, although the fact is that Hindi is the primary language of Indians. Other than Hindi and English, 5 other major languages widely spoken by 50 million people throughout the country are Marathi, Tamil, Bengali, Telugu, and Urdu.
03: Highest number of mosques –
More than 300,000 mosques are there in India, which is perhaps more than the number of the Islamic worlds. India resides the second highest Muslim population.
04: Still reside royal families –
There are still royal families living in some parts of India and enjoying the royal lifestyle. Some of the royal families are The Mewar Dynasty of Rajasthan, The royal families of Alsisar, The Gaekwads of Baroda in Gujarat, etc.
05: World’s largest religious gathering in fair –
Every year Kumbh Mela in India has the world’s largest devout gathering which is listed in the UNESCO’s Representative list of Intangible Cultural Heritage of Humanity. The fair is observed to be rotating in four religious places that are Haridwar on Ganga river, Nashik on Godavari River, Ujjain on the Shipra River, and Prayag on the union of Ganga, Yamuna, and Saraswati River.
06: Oldest colonized city in the world –
Varanasi was one of the inhabited cities in the world, which is believed to be found in 5000 years ago by Lord Shiva. Located on the bank of Ganga River, Varanasi is also known as “the holy city of India”, “the City of Lights”, “the City of Temples”, “the city of Learning”, and “the religious capital of India”.
07: The Largest population of Big Cats –
India has the largest population of Royal Bengal Tigers. Located in Karnataka, Bandipur National Park has the highest number of tigers which is approximately 408, Uttarakhand with 340 tigers, and Madhya Pradesh with 308.
08: Asia’s largest spice market –
Located in the nation’s capital, Khari Baori is the Asia’s largest wholesale spice market which you can explore in Golden Triangle India Tour. It is the most popular and searchable tour of India which is the best way to get introduced with countries richness.
09: The iconic Taj is a popular attraction –
The iconic architecture of Taj Mahal is the finest example of Mughal’s architectural style. The monument is widely popular for its magnificent white-marble structure. Taj Mahal is located in Agra also the pride of the country and it is a major attraction of Delhi Agra Jaipur Tour Package.
10: India resides color coded cities –
Rajasthan is the largest state of India and also known as the Land of Kings. Almost every city of Rajasthan is color coded like Jaipur is named as the Pink City of India, Jodhpur is the Blue City of India, Udaipur is the White City of India, Jhalawar is the Purple City of India, and Jaisalmer is the Golden City of India. All these cities are the most popular cities of Rajasthan Tour Package.